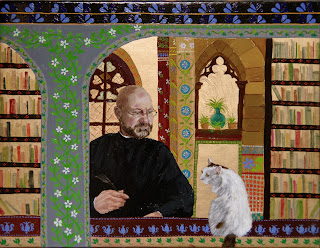 Saint Jerome was the translator of the bible. He is also the one who removed a thorn from a lion's foot, said lion becoming a faithful friend thereafter.
An intellectual, Saint Jerome's cutting wit made him not always that popular with his fellow scholars/monks. As he was profoundly absent minded, and one assumes short sighted, his 'friends' decided to get back at him by planting a blue dress in his room. Next morning, Saint Jerome dressed in a hurry to go to mass, flinging on the first clothes he could find (one again concludes that tidiness was not his forte) and ran to church wearing the dress, whilst all the other monks snickered.

RF Lack told me that the reason the lions in Trafalgar square look a bit weird is that the sculptor, Landseer, modelled their bodies on a cat for want of a better model. He sadly cannot recall where he heard this information so i cannot verify it.

Now RF Lack is also an absent minded intellectual, with a somewhat sharp sense of wit, a short-sighted gaze and untidy rooms. I think he might spot a blue dress though. His lion is his cat, Toutatis, who sports a lion mane in real life thanks to a Maine Coon ancestor.